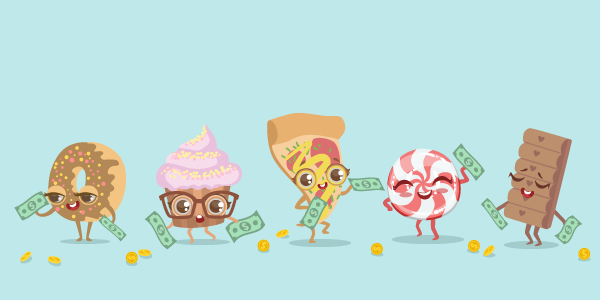 All fundraisers aren’t created equally. When it comes to food fundraisers, some tend to tip the nutritional scale way out of whack. See, fundraising companies have thought about products people love, and what’s something a lot of Americans tend to enjoy? Junk food.

Indulging in junk food every once in a while isn’t terrible, but just think about the popular fundraising products you’ve been asked to sell for your kid’s school repeatedly: cookie dough, candy, and sodium-filled salty snacks all come to mind. In a nation where childhood obesity rates continue to climb, why are so many schools asking kids to sell unhealthy junk food items to raise money?

In recent years, a lot of schools have created and applied junk food policies to fundraising. In fact, 31 states have significantly restricted unhealthy fundraisers, 26 of which are not allowing any exemptions from the USDA requirements while the other five states are more lenient and allow five exemptions per year. So it’s pretty clear that it can be conflicting to preach healthy eating to kids, but then ask them to sell junk food to raise money.

For an even better overview, watch this quick summary video about junk food getting into the school system:

As you can see, junk food fundraising is a many-headed beast, so let’s look at all of the ways it’s being pushed in schools.

In your days as a school parent, you probably haven’t been able to avoid the infamous candy fundraisers, where kids get cases of chocolate bars, chocolate covered nuts, and assorted candy and are tasked with selling every last package. Other popular fundraisers include selling tubs of cookie dough, pizza kits, and popcorn.

The mixed message here is that kids are often told to limit their consumption of these items, but then they have to turn around and sell them to others. And it’s basically a given that you as the parent will have to buy some product just to give them more sales.

Since they’re fairly easy, they are a popular fundraising choice for organizations. It can be a gamble to run a junk food fundraiser, though, when you don’t know what other organizations in your area are running. If they are also running a junk food fundraiser, you’re saturating the market and might struggle to find people willing to buy your product.

When we covered restaurant night fundraisers before, we were looking at them through the lens of sit-down chains. However, fast food restaurant nights have been growing in popularity, and, well, it’s no secret that fast food isn’t the healthiest food option out there.

At the same time, though, eating fast food once in a blue moon isn’t going to hurt. The problem is that these fundraisers are so easy to put together that they become a frequent and reliable fundraiser for schools, meaning you’ll be asked to eat at them a lot more.

Tons of restaurants allow fundraising nights, and if you have to run a restaurant night fundraiser, opt for a sit-down chain where there are healthier options on the menu. You’ll also receive more of the money back as the meals will cost more. There are also some faster dining options where you can order healthier items, like Panera Bread or Chipotle.

Junk food rears its head yet again, but this time, it’s not the actual fundraising item, but rather, the reward students get for raising money! See, to get kids excited about selling items or participating in a fundraiser, schools create incentives and prizes for raising a certain amount of money or for raising more than another class.

These prizes often involve a pizza or donut party, indulging in cupcakes or candy, and it bothers a good deal of parents. Lisa Leake, the mom behind 100 Days of Real Food, mentioned her frustration that kids receive a donut or cupcake party for collecting Box Tops, the kids have popsicles with the principal for the top fundraising student, not to mention all of the treats they get for birthdays of their classmates. Instead of these treats, Leake mentions a list of viable rewards and incentives that are healthier and more fun than the constant deluge of treats.

How Does Health Become a Factor?

The disregard for healthy foods in and around fundraisers has become such an issue, but junk food fundraisers aren’t the only options available for schools. The problem is these bad-for-health fundraisers bring in a good amount of money without the effort required for running a traditionally healthy event, like a 5K fun run, which is why so many schools are clinging to them.

There are a few reputable health food fundraisers out there, though, that provide everyday essentials and are not a hindrance to a healthy diet. Kids can sell boxes of whole grain cereal, bags of coffee, and there is even a fundraiser that pairs farmers with schools and organizations so the students can raise money on healthy farm-to-table products.

With the push toward whole grain and organic food, these fundraisers might be a good way to reach every type of parent. Sure, you’re still selling products, but at least if parents are buying it, they won’t feel as bad as they would if they were buying candy. If you really want to capitalize, it might be a good idea to run a health food fundraiser like this at the start of the new year when people are setting their resolutions and looking to get healthy.

Alternatively, you could run one of the many healthy non-food fundraisers and give people the opportunity to raise money on what they want. An easy way to do this is to run a scrip fundraiser where families can raise money by using a gift card on their everyday purchases. So then, if you’re strapped for time, you can pick up a fast food chain gift card, earn a rebate, and grab a quick dinner. Or if you have time, buy or reload your grocery gift card, earn a rebate, and shop for dinner. ShopWithScrip offers gift cards for the popular retailers you shop at regularly, so you can earn no matter what your lifestyle is.

As you know, it’s okay to indulge in junk food now and then. But don’t get tricked into thinking it’s the only viable option to raise money for your kid’s school.

Which One-time Fundraiser is Right For You? [Free Download]

Closing the Door on Door-to-Door Fundraising